Angadi Theru – A Reality Zone
After getting boredom by watching hero’s flying in amidst the air fighting with a villain, am chilled by Vasantha Balan’s recent creation. Vasantha Balan's 'Angadi Theru' may not be a regular film, but a hardcore reality about problems and pitiful lives of those salespersons, whom we meet often at textile showrooms. Surely this movie will become one among the impact creating like katradhu tamil, Nan kadavul.
T. Nagar, one of the prominently commercial areas of Chennai is well-known for its lavish showrooms, where everyone from a billionaire to a middle class family walks around. But Vasantha Balan's portrayal on other-side of T. Nagar is pretty mind-boggling.
Looking at others person's diary is a crime. But what we are seeing in this movie is a diary of people who works under bloodsucking management. But after seeing their miserable life, if we dont respect them, its a biggest crime ever. A supervisor hitting his subordinates, giving sex tortures, people like those do exist and should be taught a lesson. Humans who dont treat others as humans, its such a nasty thing. 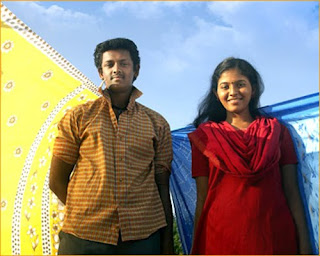 The day-to-day problems of these salespersons, their humiliations and need to resist such cruelties of their bosses have been distinctly presented. The story as a whole doesn’t correlate anything but scenes as individual has been portrayed from real news.
The way a strange person finds a job by cleaning public toilet is a good-shot of reality and humor as well. On pars, the lame man and his wife, their support for each other is a heart-binding effort by Vasantha Balan.
Hats off to Vasantha Balan for such a brilliant attempt of showcasing the realities that was till now an unknown mystery for Chennaites themselves. And if you're a Chennaite, you must appreciate this filmmaker have bringing you such a realistic drama.
Jyothi Lingam (Magesh), a top-scorer at 12th STD in his school has to give up his dreams of joining engineering course when his father dies in a train accident at unmanned level crossing. When he turns to be the only hope of bread and butter for his family members, he takes up a job at a leading textile showroom in Chennai along with his friend Maarimuthu (Black Pandi) through an agent. 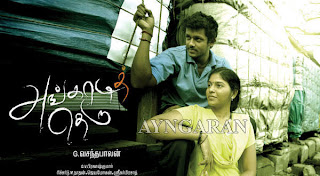 Anajali(katradhu tamil) a middle class girls supposed to support the family holding the elderly position covering all her miseries in her behaves boisterously. A tears shows no sign of glycerin through out the film.
Maarimuthu (@ black pandi) a nice friend of lingam who fails in 12th std wants to prove himself to his father who beats him for his failure. A nice, fascinating, supportive friend one should have in life.
Technically, the film scores brownie points on all aspects. Be it Richard’s cinematography, the musical scores of G.V. Prakash and Vijay Anthony, art direction by Muthuraj are awe-inspiring…
Especially “aval apadi onrum azhagilai….” Portrays what real love is..
Dialogues by Jaya Mohan are powerful and fantastic.
On the whole, 'Angadi Theru' is best to regarded as a reality drama that remains close to our hearts rather than calling it a cinema. If Vasantha Balan had trimmed down the duration by avoiding unwanted sequences, the film would have been pleasurable experience even for the minis cule audiences.
As of now, it will make high waves at B and C centres and Ayngaran International can take a deep breath with relaxation as they finally made it bigger after continuous flops in the past.
Verdict: Go for it…
Rating: 4/5